Steven Fawkes - Where Languages have Taken Me

Steven Fawkes, Membership Officer, Trustee and volunteer for the Association for Language Learning and ALLNE, tells us where languages have taken him.

My parents taught me to read before I went to school, and I soon became an avid consumer of the books (any books)  I found around the house. One of these gave me my first encounter with a language not English, in the West Midlands village where we lived; it was at the back of a Daily Express annual where the final spread, for some intriguing reason I still don’t understand , consisted of illustrations, lyrics and music for the song Au clair de la lune in French. I was amazed; why couldn’t I make sense of these words? My mother had been good at French at school and knew the song, so she explained what it was and sang it for me. Now I was entranced; it felt like being let into a great secret - that you could make entirely different sounds with your mouth and only some people would understand them. I remember dragging my fingers along the wall on the way home from school, making up words in my mouth that sounded like what I remembered of those sounds, and then asking for another performance when I got in.

I discovered at secondary school in Leamington Spa and later in Wolverhampton that I was ‘good at languages’ : French and then Latin, then German and Russian , and they, and the curiosity that went with them, were what took me first to ‘my French family’ in the Rhȏne Valley, and later to  university in Cambridge and a year abroad in Marseille (an amazing place – not just for someone from the Black Country!)

As a teacher later in Durham my languages introduced me to hundreds of young people with whom I could share the enjoyment languages brought me, and find out over the decades how they were exploring the world in consequence. Those were the years too when I met other people – other Language teachers – from around the whole region – people who were interested in similar things to me - what a revelation! We worked together on enjoyable projects like Graded Objectives and the North-East Festival of Languages where hundreds and hundreds of school pupils, older students, families and community members would gather to have a good time performing and playing around with Languages.  (It’s great that we are now doing that again in the 2020s with the addition of what online engagement can bring.)  We were lucky to have an International Office at County Hall (that still exists in 2021) building bridges between the North-East of England and the rest of the world – so many interesting encounters arose from that.

From the classroom I then moved to a position as BBC Education Officer in London, part of a team of enthusiasts who worked with producers to make TV, radio , print and later website resources for UK schools. In that rȏle I travelled with the production team to spot sites, events and talent in schools abroad that could bring languages alive for British pupils; that job meant I needed to learn some Spanish, BSL, and later some Japanese, and work with multilingual teams. I  discovered a talent for writing lyrics that were worked on by a professional composer and recorded by musicians; I was then invited to hear pupils singing those same songs in classrooms from Sussex up to Kirkcaldy. Different kinds of activity and invitation took me as well as to the BAFTAs, to meet collaborators in Embassies and to speak to Conferences in Norway, France and Germany, as well as all over the UK.

European projects, when they began, opened the door to meeting amazing people, who soon become friends, in Sweden and the Canaries, in Perugia and Athens, in Edinburgh and Saxony and Nice … Meeting people in such projects soon helped me to lose my shyness, and gave me more and more confidence to travel to interesting places around the world by myself, even if I was not familiar with the languages spoken in say Turkey or Czech Republic, or Poland or Romania; travel becomes less intimidating, the more of it you do.

Within the Association for Language Learning I continue to meet new challenges through languages – supporting teachers of languages I don’t know – most recently Chinese and Arabic, and learning how to commission and edit texts for publication.

The common thread that ties all of these things together is, of course, the people I have met in the different decades of my life.  I have now been part of ‘my’ French family for over 50 years, which is a great gift in life, where two families almost merge into one, and people feel at home together on either side of our little Channel. I have now known 5 generations in that family, and all from that initial encounter with language. 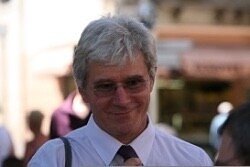