Nathalie Paris - Where Languages have Taken Me

For Nathalie, language learning took her on a journey to teach French in the UK, and then all over the country in a mobile French library bus!

I am French, and it was not love at first sight between English and me… far from it…

I did not get a chance to learn a language until I went to secondary school (lucky primary school children these days), and by then I was desperate to learn German: I had German cousins who could not speak French and I wanted to be able to communicate with them when I saw them. However, my parents made me learn English instead, and I hated it! It did not help that my English teacher only ever spoke to us in English (no French whatsoever) and I did not have a clue what was going on… I finally got to learn German in the 3rd year and loved it: I even got to go on 2 German exchanges, and as a result, at the age of 15, I wanted to go and live in Germany. However, our teacher was often absent, and by the time I reached college I realised that I was not as good at German as I thought I was… and English took over thanks to a very encouraging teacher. Yes, my teachers had a massive influence on my language experience, which is partly why I feel so passionate now about ensuring that children and young people have a positive experience of learning a language, from a young age.

I decided aged 17 that I wanted to study English (and German) at university, but ensured that I spent some time in England the summer before I started: this gave me such a head start in my studies! Bonus: one of the ladies I stayed with (I helped with her young son) when I was 17 offered me a job as a teaching assistant in her school 2 years later! The other lady… well I married her son, the father of my 2 children!

After 3 years in England, I qualified as a secondary school languages teacher at the University of Manchester, taught in schools in Liverpool then Newcastle. In 2014, I decided to carry on teaching, but on a self-employment basis. Since then, I have: learnt Spanish and been on courses in Spain; taught French and Spanish in primary schools; driven a 7.5t mobile library bus full of stories (mostly in French, but also some Spanish and German) and shared some of those stories with children on the bus; taught French for Newcastle University… And more! I have had all of those opportunities through learning English, German and Spanish, and through sharing my love of languages with others. I absolutely love what I do!

Everybody’s experience is different. Where will learning languages take YOU? 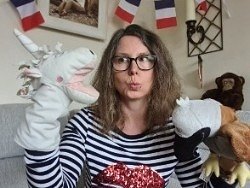 Nathalie is French; she studied English and German at university in France and lives in England now. She teaches French in primary schools and university, and is the owner of Nattalingo. She has 2 bilingual children, Max, 20, and Leah, 17.
Visit Nattalingo!