Hélder Costa - Where Languages have Taken Me

Charity director Hélder tells us how learning languages presented him with opportunities and adventures he'd never dreamt of!

My name is Hélder and I can firmly say that languages changed my life!

I am fluent in both English and Portuguese and I can hold a basic conversation in Spanish, Italian and French. To know languages, even on a very basic level, opened up a pool of opportunities that I never dreamt of.

I had the opportunity of traveling across Europe and making friends in some amazing places. I’ve participated in the Comenius Project and with them I had wine in France, Pasta in Italy and took the cliché picture with the Little Mermaid in Denmark. Met people, made friends, created memories.

I did my degree in the UK, joined my Students’ Union and even got elected President. Travelled across the Baltics and built some of the most amazing friendships ever. I presented conferences to over 2000 guests, got interviewed in several radios and TV channels both in the UK and overseas, and had the opportunity of supporting our community through my positions as a Non-Executive Director at International Newcastle, a Youth Board Member at the Common Room of the Great North and more recently as a Trust Executive at the Prince's Trust.

Languages presented me the world as a pool of opportunities and adventures, and I am now ready to give languages to the world. 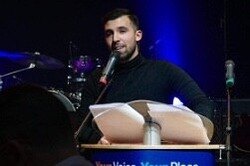 Born in Portugal, Helder Costa is a Non-Executive Director at International Newcastle, a Youth Board Member at The Common Room, and a Trust Executive at the Prince’s Trust.
Find Hélder on LinkedIn
* This blog was originally written for the EXPRESS YOURSELF North East Festival of Languages, and has been republished with permission from the author and the festival.
Where have languages taken YOU? If you are interested in writing a feature for where languages have taken me, please contact marketing@bsmall.co.uk.
Share this article...