Chris Hughes MBE - Where Languages have Taken Me

Freelance translator, teacher, interpreter and learner of 20 (!) languages, Chris Hughes MBE shares his passion for language learning with us.

If someone had told my eight year-old native English-speaking self that there really wasn’t any point in learning other languages, I might just have taken them at their word, were it not for a poorly thumbed copy of “See It and Say It in Spanish” on my parents’ bookshelf.  There was something a bit daring about flicking through your parents’ books and that, combined with the realisation that Spanish was a secret code I could make sense of, made another language extremely exciting.  Then, finding my mother’s old French dictionary further along the shelf showed me that there was yet another mysterious language – a bit like Spanish – that started to make sense to me too.  I had no inkling that such an inauspicious start would one day lead to teaching Albanian, Basque and Romanian to government officials, writing a book, interpreting for the military in a conflict zone or meeting the Queen.


By the time I’d started secondary school and formal French lessons came along, I was already well and truly hooked.  My sneaky Spanish let me spot the similarities between ‘puerta’ and ‘porte’, ‘amigo’ and ‘ami’ and even ‘hace frío’ and ‘il fait froid’ and that made languages even more fascinating.  I wondered what other languages I could branch out into.  A hugely inspiring German teacher, whose enthusiastic motto was, “Deutsche Sprache, schöne Sprache”, took me in a new direction that eventually led to Dutch, Swedish, Frisian and a little Icelandic (not to mention a fascination with Old English).  I went on to pursue Spanish at school, irritating the teachers no end, I’m sure, by interrupting them in the staff room at break times to ask them obscure grammar questions.  Spanish was followed by Latin and Italian and even Portuguese, which my linguistically-leaning headmaster allowed me to sit in school at GCSE and A Level.

So it was no surprise that languages were my chosen path at university.  The only thing I had to consider was precisely which languages to pursue.  I started off with Spanish and Portuguese, which were both blessings, in that Spanish was, by that stage, the language love of my life and only three of us were studying Portuguese in that year.  This led to one of the most memorable overseas trips of my life – the three of us hitchhiking around northern Portugal, speaking almost exclusively Portuguese, not always having a clue what people’s answers were, therefore getting hopelessly lost (a lot) and discovering more of the country than we’d intended to.  We stumbled across a village that had never witnessed foreigners, got invited to play a traditional Portuguese ball game and heard tales of Salazar’s Portugal from the oldest people in the village.  That, together with the lorry driver who regaled us with accounts of how he’d shot wild boar (the word ‘javali’ is etched on my memory) and a hotel owner who knocked money off our bill because we’d learnt his language, is why foreign travel is a hundred times more interesting with a language.

Dutch, Romanian, more French and comparative Romance languages came after that, but it was Albanian that probably influenced my career most.  For me, Albanian came about almost entirely fortuitously.  I was desperate to learn a new language, one that was a little more “out there”, not too widely spoken and suddenly Albania was on the news, as its long-ruling head of state had just passed away.  So I started learning that and never looked back.  Even several years later, I had no expectation of using it professionally.  Indeed, I didn’t think that anyone would ever want to pay me to use it, but that all changed when Albania popped back into the news in 1996.  The UK government was keen to produce a cohort of Albanian linguists (as, perhaps not shockingly, there weren’t many of us up to that point), so I was approached to produce and teach an Albanian course for government linguists.  It was a labour of love for me!  The initial focus on Albania quickly switched to Kosovo, so I had to produce a course teaching the majority dialect of Kosovo (not the standard literary Albanian language of all the existing text books).  It was just one of many highly rewarding linguistic challenges.  With languages, there’s always more to learn and even the most experienced purveyor learns something new almost every day.  That’s another joy of learning and working with languages.

Not only is Albanian a beguiling language, but it also gave me many unforeseeable opportunities.  I was whisked off to Kosovo shortly after the Kosovo conflict to interpret for the UK military, translated official documents and contributed to foreign policy-making in the area.  All things I never would have imagined when I picked up that Communist-era Albanian textbook in the mid-1980s.  The course that I had the pleasure of creating and teaching turned into a book and I became a published author.  I was awarded an MBE and met HM The Queen, all as a result of a passion for languages.  I’ve written for foreign newspapers, taught consuls, ambassadors, soldiers and civil servants a range of languages, gone into schools to spread the language message and even been asked at the last minute to conduct Dutch and Portuguese GCSE orals.

Now I have my own business – Albaro Languages – so I can translate, teach and occasionally interpret Albanian, Basque, Romanian and several other languages to my heart’s content.  It’s the latest step on an eventful, unpredictable language-inspired journey that began with that unused Spanish book that my eight year-old self couldn’t put down.  Wherever and however you become interested in languages, there is (literally) a much wider world and a much wider audience out there for you in so many fields. 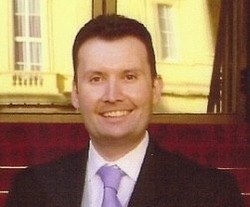 Chris Hughes has been working with (and enjoying) languages for over 25 years.  He was awarded the MBE in 2006 for multilingual services to the UK Government and is currently learning his 20th language.