This week, Ophelia and Cath have a busy day ahead with touch-typing, measuring, letter practise and art!

Rachel back at nursery meant two calm and productive days with Ophelia. We managed to tick off a lot of the school activities as well as a few ideas of our own including O typing her chosen words on my laptop. I’m hoping that by the end of Jan she’ll be touch typing and I can set her to work… In reality, she spends quite a bit of time hunting for each letter on the keyboard and I realise of course that these are upper case letters but they reproduce as lower case on screen and the initial letter changes magically to a cap. Nice and confusing. (Sorry, school.) I’m encouraging her to read them and have inserted some easier ones like pan, pot, pen and mat that she sounds out well. The others she tries to remember her choices and then guess. Swimming pool…interesting! 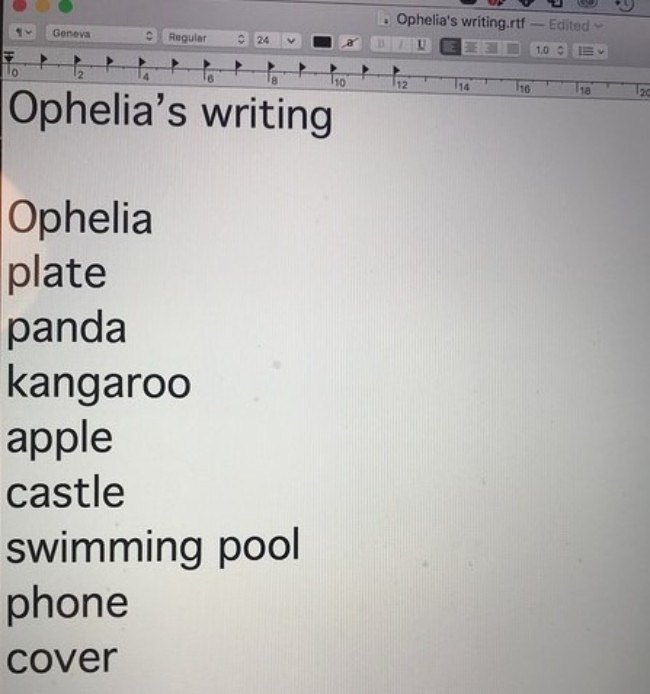 While rummaging in the kitchen drawers, O found a tape measure and began to measure the broom. Great chance to do some more measuring. She used the inches on the tape as they were bigger and clearer and insisted on counting from 1 to x … even though I suggested she could just read off the final figure. (For info, the tape only reached my cheek.)

We watched and listened to three great picture book stories read by the teachers, all with gorgeous illustrations and good themes: Animalalphabet by Julia Donaldson illustrated by Sharon King-Chai and Ruby’s Worry by Tom Percival, so appropriate in the pandemic. O spotted that Ruby had the same hairstyle as her, so great to see this in a top-notch picture book. The final book, was Peace at Last, a classic by Jill Murphy first published in 1980 that I remembered from O’s mum’s childhood. It’s about sounds keeping daddy bear awake and afterwards we listened for the sounds we could hear from the kitchen. (As I had underlined the heading, she also underlined all her words.) Some time in the afternoon, we did some letter practice from the school website: u, y and j. Although the teacher had a wonderfully calm tone and excellent explanations, trying this did cause some frustration and I pressed O to keep going using bribery (snacks and telly at the end of the day). The last school activity of the day was an art project. I was impressed that the school has a dedicated art teacher: ‘My art teacher’, said O and she obviously loves art. It had poured all day and was a very appropriate rain project - felt tip patterns left out in the rain to see what happened. 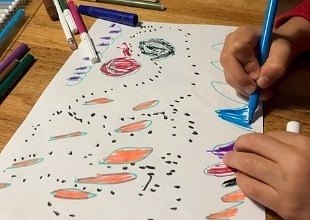 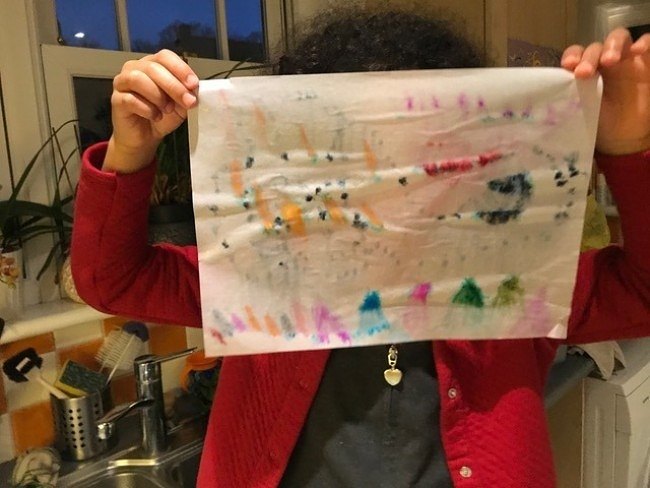 O tried several versions and short cut the process by pouring cup loads of water on the pictures in the sink - more like a dangerous tsunami than the pitter patter of English rain.

Finally telly and I made the mistake of suggesting Horrible Histories as I remembered when the original hugely successful book series was commissioned by an editor I knew at Scholastic. O and I had visited the Tower of London together in the summer - an amazing experience with a tiny number of tourists and the chance to cruise past the Crown Jewels over and over again - so I was hoping for some child-friendly history with maybe a bit of slime and gore. Mmmm, not quite! We changed channels to a nice gentle cartoon after we were both more confused by the madness. Clearly not aimed at four year olds.

This might sound like a lot but it’s two eight-hour days…and there was even some down time for both of us, coffee in the kitchen for me and Yoto stories and even a snooze in her den for O.


Cath's blog will be posted every Monday right here on the b small website - so stay tuned!

Science, Technology, Engineering and Maths fun for kids!October 2nd, 2016
Subscribe to b small mail
Sign up and receive details of our book releases, blog updates and more
Thank you for subscribing
@bsmallbear -   Roll up... - 11 months ago
Content Managed by b smallWebsite Crafted by Scaws