Cath Bruzzone - Where Languages have Taken Me

Cath Bruzzone, founder and co-owner of b small, explains how languages have always been a core part of her life.

As soon as I started writing this, I realised that learning languages is a core part of my personality, my career and my life. How did this happen? I have to thank my mother. Born to a Welsh speaking mining family in South Wales in 1921, she was a good student and loved French at her Grammar school, the only girl in her sixth form class. In 1938, encouraged by her French teacher, she went on an exchange to northern France, to a farming family (collected by horse and trap from the local station after her adventurous Channel crossing). She often reminisced about it, especially her relief that war broke out so she didn’t have to welcome her exchange student to her tiny home with their toilet at the bottom of the garden! But the love of languages was sown and she was proud of her French and later her Spanish, learned well into her 50s to enjoy holidays in Spain. In her 90s, her mind as sharp as ever, she re-read some of the French classics she had enjoyed as a student.

OK, so that’s how languages came to be important in our family. My first memory of wanting to learn another language is buying a Teach Yourself Finnish - hardback, yellow dust jacket - obviously to teach myself Finnish. I can’t now remember why… maybe I met a Finnish boy on holiday? Finnish never took hold but I did French for A Level and then started Italian at university and went on to graduate in Italian. I met my husband on my year abroad at the University of Turin (1968 so classes were cancelled because of strikes so we headed for the mountains to improve my skiing). So that inevitably led to two bilingual daughters and two budding bilingual granddaughters and a life-long affection for Italy and all things Italian.

I’ve collected a few other languages along the way by various means: Spanish at evening classes for regular holidays in Spain, enough Turkish & Greek to order a beer in a bar thanks to the excellent BBC ‘Get by In’ series, Mandarin Chinese at evening class to visit a daughter living in China and more recently… Welsh. But this seems to be my languages Waterloo. How I regret my native speaker mum not teaching me when I was a child but my father was not a linguist and she feared he’d be left out. Even after three years of classes and living part of the year in Welsh speaking Gwynedd, I feel I’m still only a beginner. But I’ve recently discovered Peppa Pig - or Peppa Pinc - on S4C (BBC Welsh channel) - and she’s helping me out.

I think it’s my Welsh roots that make me endlessly curious about other people, their lives and their languages. My mum would get off the train and tell me the life stories of everyone in the carriage! Eavesdropping and working out what languages people are speaking around me is an inherited skill and I’m not shy to ask if necessary. So I’ve been the luckiest person in my career. From the first years teaching French and Italian in secondary school, I moved into publishing as an editorial assistant at Harrap, then one of the leading languages publishers (now sadly no more) and then ten years developing language learning courses at Pan Books and finally going freelance and starting b small. As you can see from our language learning list, our mission is to encourage young children to learn foreign languages. And at the two main book fairs in Frankfurt and Bologna, we meet clients from all over the world, holding meetings in French, Italian and Spanish. Even if our clients are usually fluent English speakers, it definitely helps to break the ice and show our commitment to the business relationship with them.


So where have languages taken me? They’ve given me a wonderful family, loads of friends all over the world and a really enjoyable and fulfilling career. 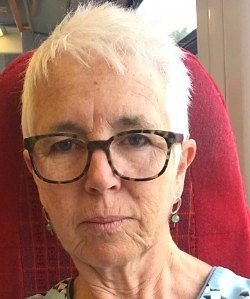 Cath studied Italian at Reading University & started her career teaching French & Italian at secondary schools. She moved into publishing where she worked as an editor at Harrap, Thomas Nelson & Pan Books before starting b small publishing, now co-owned with Sam. She has two daughters & two granddaughters & lives between Twickenham, Snowdonia & a sailing boat.

Sam - October 13th, 2020 1:32pm
Love this, Cath! Especially the part about interrogating everyone on the train carriage. Definitely a family trait then!

Reply
anna - October 13th, 2020 4:17pm
Great Cath in my case learning English was a divine inspiration after years of French at high school , without English nowadays one feels like a fish out of water.

Reply
Annemarie Williams - October 20th, 2020 2:13pm
Like you , Cath, my Ditch mother never spoke Dutch with me - an also to my regret. Having spent my childhood in Uganda I learnt Swahili and 60 years later I still remember it better than more recent languages I have learnt. So important to learn young!